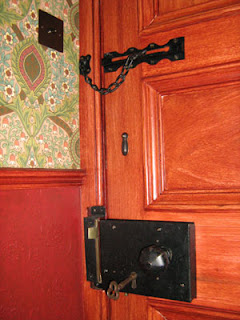 I actually finished restoring and decorating the vestibule in January, but I have only just got round to adding some pictures to the web. The main feature of the vestibule is the Bradbury & Bradbury wallpaper. Even for this small area it was rather expensive and after it was shipped from California as well as the postage I got stung for VAT on the import and a handling charge - ouch. The paper had to be hand trimmed using a very sharp knife and straight edge. It was not easy stuff to hang and my edges were not as perfect as you get with modern paper. I was very pleased when I recently visited an old house (Kellie Castle in Fife - former home of Robt. Lorimer the Scots architect) and found that the edges on their original Morris & Co wallpaper was as imperfect as mine.

I finished the hall, stairs and landing in the summer and have still not posted new pictures yet but will get round to this eventually.
Posted by Gordon at 00:35